The current, 1960s, building replaces at least one earlier wooden structure; it actually started life as a cottage.

The Club was tied to the Wards Brewery of Sheffield. In the early 1970s, the brewery refurbished the Club with very 1970s decor, i.e., orange chairs etc. It took the Club decades to pay this debt back to the brewery and it was never refurbished again, retaining the 1970s decor until it closed in 2012.

In 1995, perhaps giving or taking a year, Wards brewery was taken over by the Vaux brewery. Guest beers began appearing as alternatives to the Wards & Darley bitters which had only ever been available before. 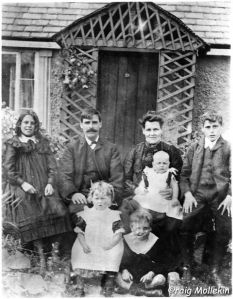 The Brazier family residing at Bowbroom cottage, prior to World War One

The Club Secretary, Alec Botham, kept trying new ideas in order to entice custom in the 1990s and 2000s, such as introducing a short-lived hot snack counter, soup nights and even organ nights where ‘Mac Duprey’ would take centre stage.

Club ‘turns’ used to be frequent and infrequent; sometimes weekly and sometimes monthly.

The Club had all the usual sporting teams – darts, fishing, football and pool etc. and awards would be handed out at the very well attended darts and fishing ‘do’s’.

Circa 1996, the Club purchased a snooker table from the defunct Dale Brown Social Club on White Lee Road. The pool table was then moved into the ‘tap room’ and the snooker table placed in the main Club room, where the pool table had been situated previously.

In the 1990s, due to complaints regarding noise, the ‘one armed bandit’ was placed into its own little booth, which looked quite odd.

The Club used to have a dedicated Bar Steward, but this role was made redundant, perhaps in the late 1990s.

Due to a clientele base that was literally dying off, monetary problems and an inability to adapt to the requirements of the younger generation, the Club closed in February 2012. There was talk of it being used as a child day care/community centre and even as a private club. The latter idea was aborted due to it being stipulated by Rotherham Council that it would require a huge perimeter fence erecting around it, which deterred the investor. It was eventually sold to the McColls retail chain who opened their store there in December 2013.

Members of the Club’s Committee included:-